By Editorial Team on January 10, 2020 in Microbiology, Parasitology

Urine casts are cylindrical, cigar-shaped structures produced by the kidney and present in the urine in certain disease conditions.

All casts are composed of a mucoprotein known as Tamm-Horsfall protein which is secreted by the distal loop of Henle, the distal tubule and the collecting ducts at a fairly constant rate. A significant number of urinary casts usually indicates the presence of renal disease.

Urinary casts are formed only in the distal convoluted tubule (DCT) or the collecting duct. The proximal convoluted tubule (PCT) and loop of Henle are not locations for cast formation. Casts are the result of solidification of material (protein) in the lumen of the kidney tubules.

Once formed, these casts of the tubule are eliminated via the urine and may be seen in the urine sediment. They may contain RBCs, WBCs, renal epithelial cells, fat globules, bacteria, and degenerated forms of any of these structures, which are seen as granules.

Aggregates of plasma proteins, including fibrinogen, immune complexes, and globulins, may also be seen as granules within a cast.

Urinary casts can be divided into two main categories : Acellular and Cellular Casts. 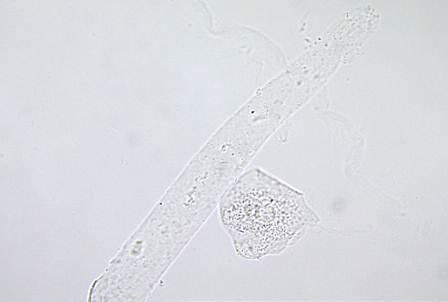 Hyaline casts are the most common type of casts which are composed of solidified Tamm-Horsfall mucoprotein. They have smooth texture and a refractive index very close to that of the surrounding fluid.

Generally, hyaline casts have parallel sides with clear margins and blunted ends. Hyaline casts can be seen even in healthy patients. They may be seen in increased numbers during dehydration, exercise or diuretic medicines. 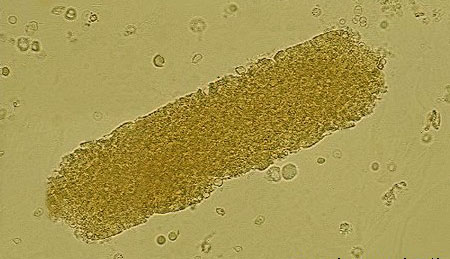 Granular casts result either from the degeneration of cellular casts, or direct aggregation of plasma proteins or immunoglobulin light chains. They have a textured appearance which ranges from fine to coarse in character.

Their appearance is generally more cigar-shaped and of a higher refractive index than hyaline casts. They are seen after sternous exercise, chronic renal diseases, acute tubular necrosis etc. 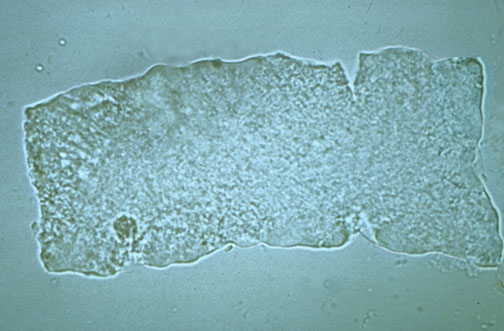 Waxy casts represent the final stage of degeneration of cellular casts. They are more refractile and therefore easier to see compared to hyaline casts.

They are uaually seen in tubular injury of a more chronic nature than granular or cellular casts like severe chronic renal disease and renal amyloidosis. These casts are also called renal failure casts. 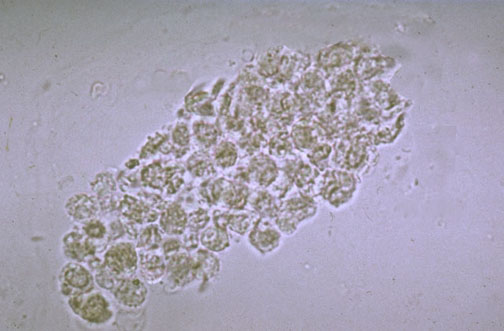 Fatty casts are formed by the breakdown of lipid-rich epithelial cells. These contain lipid droplets within the protein matrix of the cast and are identified by the presence of refractile lipid droplets. They are usually seen in the conditions like tubular degeneration, nephrotic syndrome, hypothyroidism etc.

A cellular cast may be composed of any of the cells found in the urine sediment, such as RBC, WBC, or renal tubular epithelial cell. The cellular cast appears to result from a clumping of cells that are incorporated in a protein matrix. 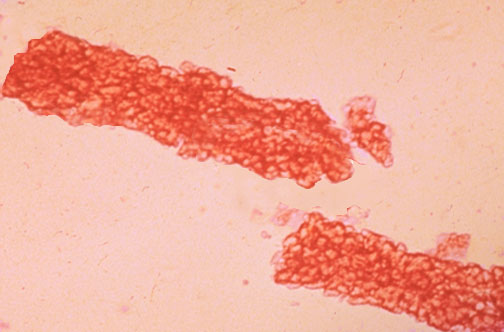 Red blood cells may stick together and form red blood cell casts. Such casts are indicative of glomerulonephritis, with leakage of RBC’s from glomeruli, or severe tubular damage. 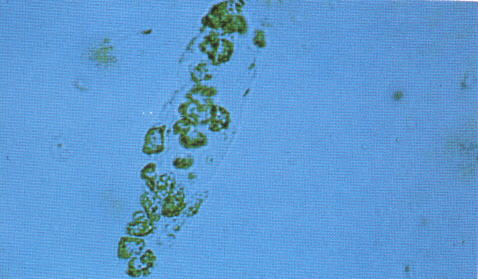 White blood cells (generally neutrophils) are present within or upon casts. These casts are typical for acute pyelonephritis, but they may also be present with glomerulonephritis.

They may also be seen in acute interstitial nephritis, lupus nephritis, and acute papillary necrosis. 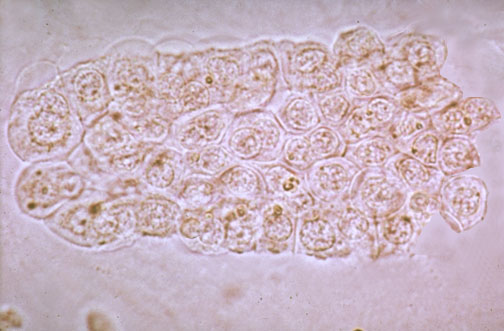 These casts are composed of renal epithelial cells. These casts are seen in conditions such as renal tubular necrosis, viral disease (such as CMV nephritis), and kidney transplant rejection.

What does it mean to have cast in your urine?

There are different interpretations of having a cast in the urine. It all depends on the type of cast. If it is a granular cast, it could indicate underlying kidney disease. If it is a red blood cell cast, it could be a sign of bleeding from the kidneys, which could be associated with different types of kidney-related diseases. If the cast is tubular epithelial, then it could suggest damage in the kidney’s tubule cells.

Are casts in urine normal?

It is normal to have cast in the urine, but in a very few amount and usually hyaline or granular in nature. However, you have to be aware that people with chronic or progressive generalized nephritis, there could also be the presence of a few cast.

What causes granular casts in urine?

A granular cast can be associated with kidney-related conditions, but non-specific and could also be observed in people with other types of kidney-related diseases.

What is the normal range for casts in urine?

Hyaline cast in urine for healthy people ranges between 0 to 5 per power field. If you have just performed an exercise routine, there could be an increase in the number of hyaline casts. There are other types of the cast that could be detected in the urine and each is associated with different types of kidney-related diseases.

What do red blood cell casts in the urine always indicate?

If red blood cell casts are detected, they could suggest bleeding in the kidneys, which could be linked to different types of kidney diseases.

What do crystals in urine indicate?

If crystals in the urine are detected, the amount, size, and type are further investigated. A few small urine crystals in urine is just normal. However, large crystals shouldn’t be taken lightly as they could form kidney stones – a hard pebble-like substance that could get stuck in the kidneys.

How are casts formed?

Casts are formed in the thin, long, and hallow renal tubules, which explains why they are cylindrical in shape and structure. They are formed specifically in the distal convoluted tubule/collecting duct.

Why is there mucus in my urine?

What is damaging to kidneys?

The kidneys are a highly sensitive organ and most of the time other underlying medical conditions could cause damage to the kidneys. These include diabetes mellitus type 1 and 2 and high blood pressure.

What causes the protein in the urine?

The presence of protein in urine could be due to many factors such as:

If the protein in the urine is abnormally high, the doctor will request additional urinalysis and other necessary tests to find out the culprit.

What should not be found in urine?

The following are not usually found in urine:

How do you get rid of crystals in your urine?

There are different ways to remove crystal formation in urine but the most effective ones include the following:

Can dehydration cause crystals in urine?

Not drinking enough fluids causes you to become hydrated, which could have a negative impact in how urine functions. Urine has chemicals preventing oxalate from sticking together to form crystals. With dehydration, you will have a little urine and an increase in oxalate making crystallization possible. Hence, the stone is formed.

When your urine is tasteless?

Under normal circumstances, the urine has a distinct taste. However, it could get tasteless which is what normally happens if you have diabetes insipidus – an indicator that the urine has a large quantity of glucose.

What are the four major reasons a urinalysis may be done?

A urinalysis is ordered because of the following reasons:

What indicates kidney infection in a urine test?

To check the existence of kidney infection, a urine sample is checked for the presence of blood, pus, or bacteria. A urine culture might be needed depending on the discretion of the attending physician as per the result of the first requested lab test.

Are eggs high in oxalate?

Foods high in oxalate increase the chance of developing kidney stones. It includes eggs along with pork, beef, fish, cheese, and vitamin C.

What are the worst foods for kidney stones?

It is important to limit the intake of foods that could be potentially harmful to the kidneys such as:

These foods are rich in oxalate which increases the possibility of developing kidney stones.

Is broccoli high in oxalate?

Cruciferous vegetables can contain a high level of oxalate, which when consumed in large quantity could be harmful to the kidneys. These include broccoli, cauliflower, and kale.

Crystals in urine are colorless and look like a start or needle. They could form plates. They could be visibly seen alone or in clusters.

If there are foods that are harmful to the kidneys, there are also those who have the ability to facilitate kidney repair such as: