Difference Between Phenotype and Genotype

An organism is a result of its genetic makeup and environmental factors. We all know that genes are the basic unit or structure of life. The study of genes is genetics.

If you look at genetics in the simplest form, it is all about the genotype or the genes inside the body and the phenotype of the traits or characters the genes gave you.

Read through this article to understand better the differences between genotype and phenotype.

What is a Genotype

In the study of biology, you learned that the person’s trait is encoded in the gene, which is a part of the DNA. The gene can manifest in various forms (alleles).

A locus is the exact position of the gene on the chromosome. A genotype is homozygous at the locus if an individual inherits two identical alleles.

On the other hand, there are two distinct alleles inherit by the individual the classification is heterozygous for that locus. To make it simple, the genotype is the succeeding allele combination that an organism possesses a particular gene. It was Wilhelm Johannsen, a Danish botanist, and geneticist who coined the term genotype.  (1, 2, 3, and 4)

It involves all genetic traits that can or cannot be passed onto the next generation such as:

What is a Phenotype?

It pertains to the organism’s observable traits and characteristics as a consequence of the genetic material and environmental factors.

It is different from that of genotype because the phenotype is not always inherited from the parents. Phenotype is influenced by genotype and other factors such as the lifestyle, environment, and epigenetic modifications.

Unlike the genotype, the phenotype can change throughout the lifetime. (3, 4) 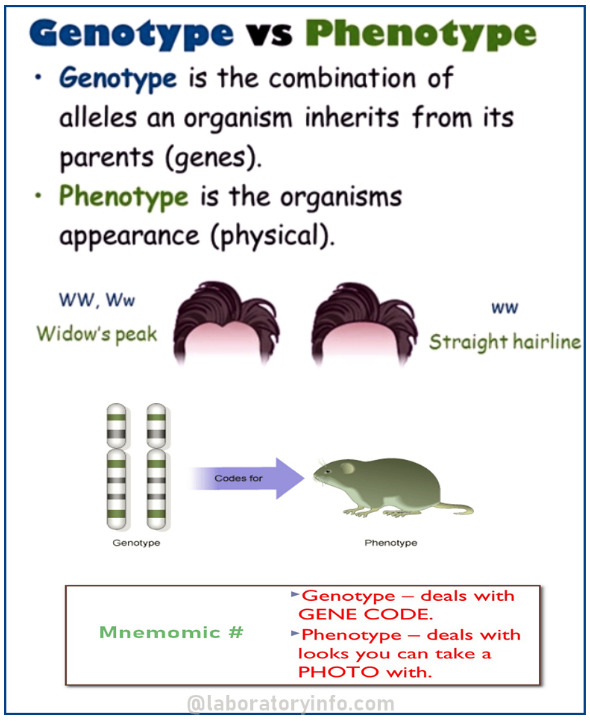 Refer to the table below for a detailed comparison between genotype and phenotype.

Genotype and phenotype explained in a nutshell

Genotypes and phenotypes are used interchangeably but there are distinctions between the two. Phenotype is all about the organism’s physical appearance while the genotype refers to the organism’s genetic composition.

Genes are minute structures, which simply means that it is hard to distinguish genotype using only the naked eyes. Phenotypes are observable traits and are a result of the expression of the genes of an organism. (1, 5, and 8)

You can easily check for the color of the eyes, hair, and skin, but will have a hard time looking at the genes responsible for such observable traits. You need to keep in mind that not all phenotypes are a result of the genotype.

The truth is most of the phenotypes are affected by the genotype as well as the exposure to various environmental and life elements. Your unique circumstances in life including the distinct things that happened to you can greatly affect your phenotype.

In genetics, it is referred to as nature (distinct genome you have) and nurture (environment in which you have lived your life).