The polymerase chain reaction (PCR) is a laboratory technique for DNA replication that allows a “target” DNA sequence to be selectively amplified. PCR can use the smallest sample of the DNA to be cloned and amplify it to millions of copies in just a few hours.

Discovered in 1985 by Kerry Mullis, PCR has become both and essential and routine tool in most biological laboratories.

The PCR involves the primer mediated enzymatic amplification of DNA. PCR is based on using the ability of DNA polymerase to synthesize new strand of DNA complementary to the offered template strand.

Primer is needed because DNA polymerase can add a nucleotide only onto a preexisting 3′-OH group to add the first nucleotide. DNA polymerase then elongate its 3 end by adding more nucleotides to generate an extended region of double stranded DNA.

All the PCR components are mixed together and are taken through series of 3 major cyclic reactions conducted in an automated, self-contained thermocycler machine.

These two pieces are then available for amplification in the next cycle. As the cycles are repeated, more and more copies are generated and the number of copies of the template is increased exponentially. 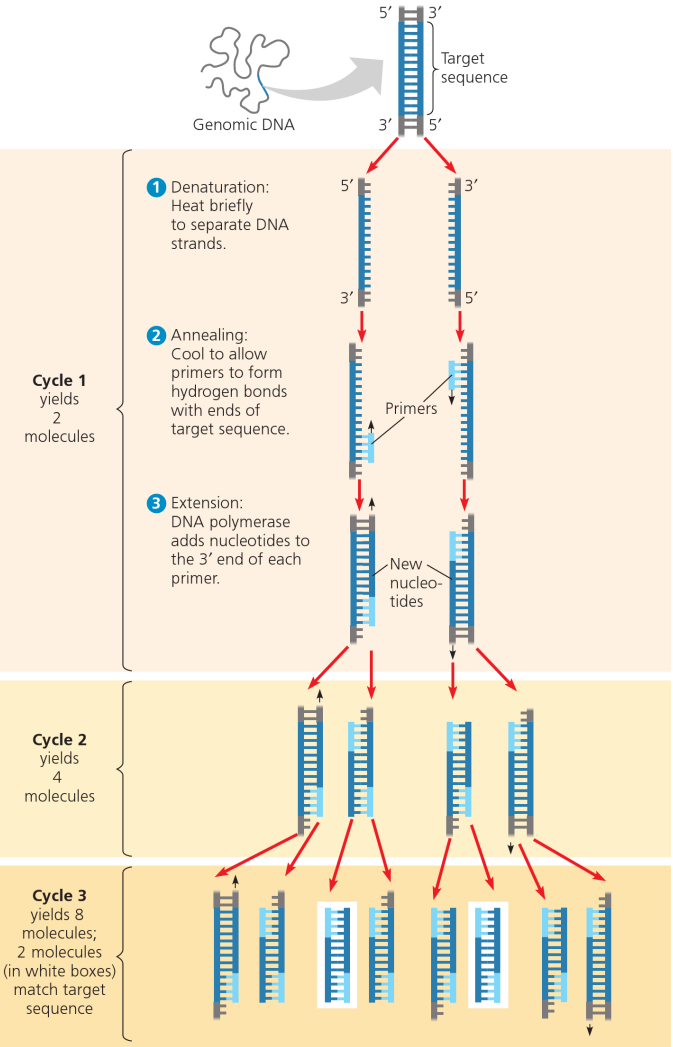 In addition to the amplification of a target DNA sequence by the typical PCR procedures already described, several specialised types of PCR have been developed for specific applications.

Some common applications of PCR in various fields can be explained in following categories.

Q 1. What is the purpose of a polymerase chain reaction?

It is a quick and inexpensive method of amplifying small segments of DNA, which is essential for molecular and genetic analyses. Every study of isolated DNA pieces needs to undergo polymerase chain reaction amplification.

Q 2. What happens in a polymerase chain reaction?

A segment of DNA is amplified using PCR. To do so, the sample is heated to denature the DNA. By denaturing means separating DNA segments into two pieces of single-stranded DNA. The enzyme Taq polymerase synthesizes the DNA to build to new strands resulting in the duplication of two original DNA. each of the strands is used to create two new copies – the cycle can be repeated 40 times making it possible to build a billion copy of the original DNA segment. The entire process would only take a few hours to complete.

Q 4. How is the PCR used to diagnose?

Real-time PCR is also called quantitative PCR. It is based on the method that includes amplification of the target DNA sequence and quantifying the concentration of DNA species in the reaction.

The end product of the polymerase chain reaction is a brand new DNA strand with a double-stranded DNA molecule.

The 72 degrees’ temperature is the optimum for Taq polymerase. Once it reaches this temperature, the extension process begins. Taq polymerase works off the primers and will generate a new strand of DNA which results in double-stranded DNA.

Q 8. How many types of PCR are there?

Not all PCRs are the same. You will be surprised to know that there are many types of PCR and the most common ones are the following:
Real-time PCR/Quantitative PCR/qPCR – It uses a fluorescent dye to tag the molecules of DNA. it is used to detect and quantify PCR products in real-time.
Multiplex PCR – It multiplies multiple fragments in a single sample of DNA using a number of primers.
reverse-transcriptase – The purpose is to create complementary DNA by means of reverse transcribing RNA to DNA with the help of reverse transcriptase.
Hot start PCR – Heat is used to denature antibodies that are used for Taq polymerase inactivation.
Nested PCR – Once the initial PCR cycle is done, another PCR is done but this time with the use of a new primer nested within the original primer. Thus, the term nested PCR. The reason for doing so is to reduce the risk of unwanted products.
Assembly PCR – Overlapping primers are used to amplify longer fragments of DNA.
Long-range PCR – A longer range of DNA is formed with the help of a polymerase mixture.
In situ PCR – It is a type of PCR that takes place in the cells or fixed tissue on a slide.
Asymmetric PCR – A single stand of target DNA is amplified.

Q 9. How accurate is a polymerase chain reaction?

Q 10. What diseases can PCR detect?

There are different types of diseases that can be detected using PCR such as:
1. Hepatitis
2. HIV
3. Human papillomavirus (causes genital warts and cervical cancer)
4. Malaria
5. Anthrax
6. Epstein-Barr virus in people with glandular fever

They are short fragments of single-stranded DNA, around 15 to 30 nucleotides long complementary to sequences of DNA that flank to the target region. What does a PCR primer do? It provides a free 3’ –OH group where DNA polymerase can easily add dNTPs.

A polymerase chain reaction is important as once DNA is amplified it can be used in various laboratory procedures and clinical methods. Examples are fingerprinting of DNA, diagnosis of various genetic disorders, detecting the presence of bacteria and viruses such as in the case of people with HIV/AIDS.

The polymerase chain reaction is composed of four primary steps:
1. The first step is denaturation using heat.
2. The second step is annealing the primer to a specific target sequence of DNA.
Extension
3. End of the first cycle.

Q 15. Who first got the idea of a polymerase chain reaction?

The polymerase chain reaction is a product of the inventive mind of Kary B. Mullis. He invented this procedure in 1985 which paved a way to scientists making millions of copies of scarce DNA samples.

It is called real-time PCR primarily because it monitors the progress of polymerase chain reaction in real-time. only a small amount of PCR product can be quantified during the procedure.

The RT PCR test is an expensive procedure. it is a nuclear-derivative way of identifying the presence of specific genetic materials from a particular pathogen such as the virus. Why it is expensive? It is primarily because the equipment and resources used to run the test are scarce.

Q 18. What is the difference between real-time PCR and PCR?

The difference between traditional PCR and real-time PCR is that the former has advanced from detection at the end-point of the reaction to detection. On the other hand, the latter enables the detection of PCR amplification during the early stage of the polymerase chain reaction.