By Editorial Team on January 3, 2020 in Microbiology, Virology

The Zika virus (ZIKV) is a flavivirus related to Dengue, Yellow Fever virus, Japanese encephalitis virus and West Nile virus. It is responsible for mosquito-transmitted infection known as Zika fever or Zika disease.

Zika Virus is commanding worldwide attention recently because researchers have found evidence that Zika may be linked to birth defects and neurological conditions like microcephaly and Guillain-Barré syndrome in adults.

Zika virions are typically icosahedral-shaped. They are enveloped, 18-45 nanometer in diameter.

The genome is a positive strand RNA enclosed in a capsid and surrounded by a membrane. The RNA contains 10,794 nucleotides encoding 3,419 amino acids.

The virus is inactivated by ether, sodium dexoxycholate and chloroform.

According to WHO, since Brazil reported the first cases of local transmission, Zika virus has spread to 21 countries and territories of the Americas. The WHO estimates 3 million to 4 million people across the Americas will be infected with the virus in the next year. 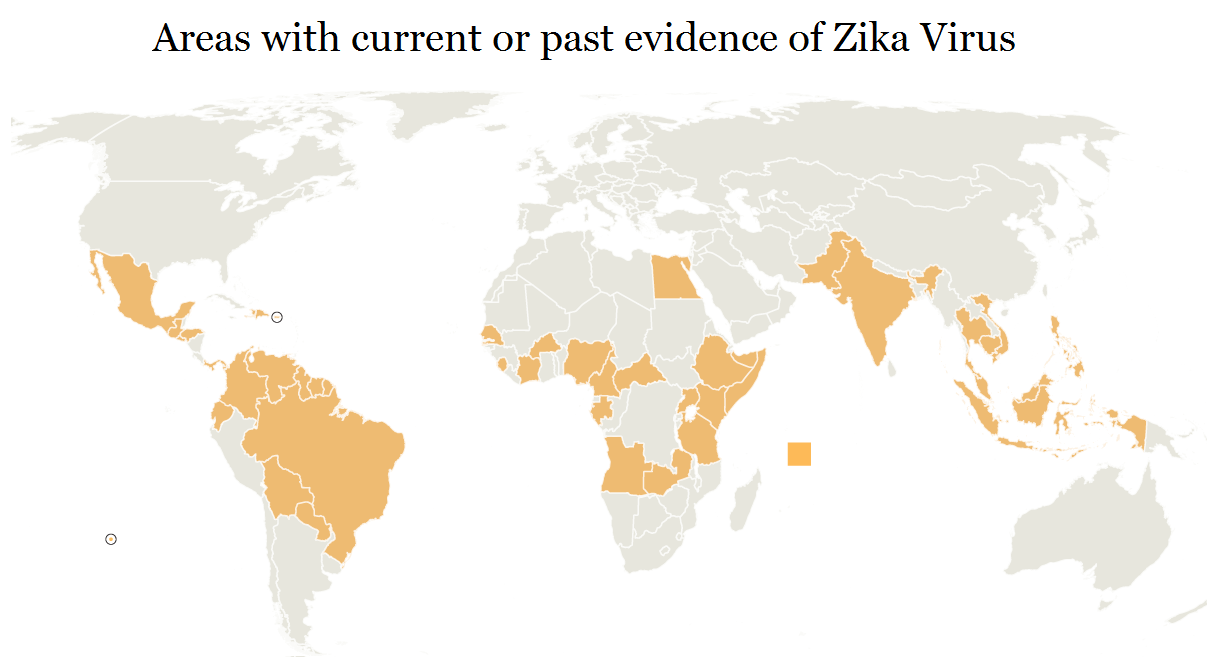 Some evidence suggest that Zika virus can also be transmitted to humans through blood transfusion, perinatal transmission and sexual transmission. However these modes are very rare. The virus was found on one occasion in semen.

The disease cycle continues as Resorvoir host to mosquito to reservoir host; 2-5 days viremia in host, 5-7 days in mosquito, then back to the host.
Information regarding pathogenesis of ZIKV is scarce but mosquito-borne flaviviruses are thought to replicate initially in dendritic cells near the site of inoculation then spread to lymph nodes and the bloodstream. Although flaviviral replication is thought to occur in cellular cytoplasm, One study suggested that ZIKV antigens could be found in infected cell nuclei.

The incubation period (the time from exposure to appearance of symptoms) of Zika virus disease is not clear, but is likely to be 3-12 days.

About only 20-25% of people infected with Zika virus develop symptoms. The most common symptoms of Zika virus infection are:

The zika infection is more serious as it is associated with two neurological conditions:

There is no widely available test for Zika infection. In most people, diagnosis is based on clinical symptoms and epidemiological circumstances (such as Zika outbreak in the patient’s area or trips to areas where the virus is circulating).

Diagnostic tests for ZIKV infection include :

No specific vaccine or medications are available to prevent or treat ZIKA virus infections. The symptoms are mild – when they appear at all – and usually require only rest, nourishment and other supportive care.

Prevention and control of Zika virus