All living organisms have genes that contain distinct traits and qualities inherited from the parents. Genes are found on chromosomes – the structural organization of DNA.

Sexually reproducing organisms have the genetic materials of both parents, which means they have two sets of chromosomes (diploid).

What is a chromosome?

A haploid is nuclei that only has one set of chromosomes containing a single copy of the gene for each trait. The organism’s sex cells are haploid and came from diploid cells through the process of meiosis.

Bacteria and fungi also contain haploid cells. If the haploid cells from both male and female fuse during the process of fertilization, it will form a diploid cell. (2, 3)

Diploid pertains to nuclei that contain pairs of homologous chromosomes. It has two copies of genes (alleles for each trait.

An organism’s somatic cell is diploid as the process of mitosis makes it possible to create new diploid cells. You can find diploid cells in most plants and animals. (2, 3) 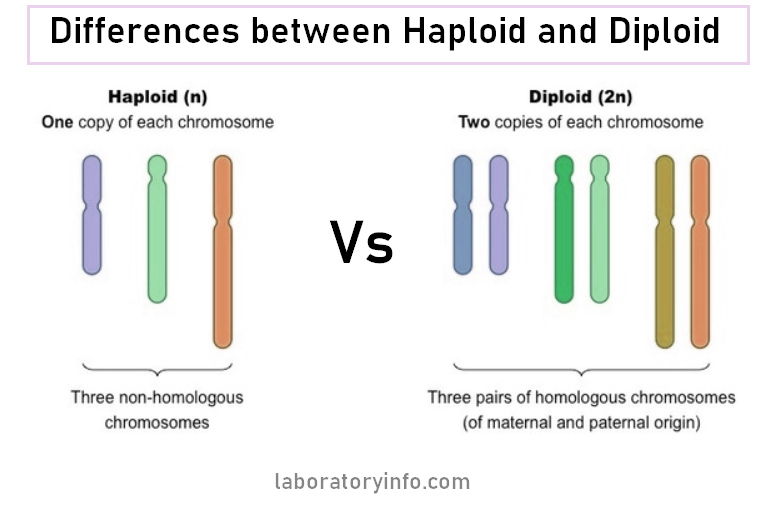 Important things to know about chromosomes:

Key terms to keep in mind when studying chromosomes, haploid, and diploid.

When you study chromosomes, specifically haploid and diploid, there are common terms you will encounter, and as such you need to familiarize by heart. These include:

Summary of key differences between haploid and diploid

Haploid and diploid cells are essential in sexual and asexual reproduction. They occur in nature and differ greatly in sets or number of chromosomes as well as the type of cells which they occur.

Always remember that the number of chromosomes varies in different organisms. Humans have a complete set of chromosomes, a total of 46 chromosomes. (3, 7, 9, and 10)