What is Capillary Electrophoresis?

The rule of the thumb is that the greater the field strength the faster the mobility. There are different types of electrophoresis but the most predominant one is the capillary electrophoresis because it yields faster results and provides a high-resolution separation. (1, 2, 3, and 4)

Image 1: The image above shows how capillary electrophoresis takes place.

What is the basic principle of electrophoresis?

Electrophoresis is a method in which the sample ion moves through the influence of applied voltage. It pertains to the migration of charged ions in the electric field. In a given solution, the electric current flows between the electrodes and carried by ions.

Looking at the principle, the charged molecules are placed in the electric field and migrate towards the pole of either positive or negative charged. A nucleic acid has a consistent negative charge imparted by the phosphate backbone and migrates towards the anode. Hence, the force will accelerate the movement of protein towards the cathode or anode depending on its charge. (2, 3, and 4) 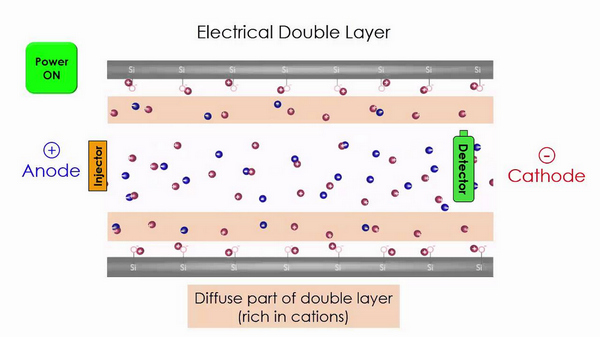 What is the importance of electrophoresis?

Electrophoresis is a method used by molecular biologists. It pertains to the migration of a charged molecule through the restrictive matrix/gel drawn by an electrical force. Through electrophoresis, laboratory professionals can identify organic molecules and study them for biomedical analysis. The significance of electrophoresis includes the following:image

Electrophoresis is known for its usefulness in DNA analysis. With gel as a medium, the researcher can flake DNA into segments with the help of an electrical charge and retain the molecules in their position the moment the charge is removed. Through electrophoresis, the researchers can check high resolution molecules. Hence, it would be easy to analyze the structure of DNA.

The development of modern vaccines is made possible with the aid of electrophoresis. The process of electrophoresis is useful in checking the vaccines’ purity and concentration. It enables the testing of different vaccines with different types and levels of antibodies. (5, 6, and 7)

It also helps detect the interaction of antibodies with unusual proteins that might be present in the samples. Hence, enabling to find the best treatment, cure, and management remedies for autoimmune diseases. (1, 5, and 7)

What is capillary electrophoresis used for?

Capillary electrophoresis is mainly used in forensic science, specifically in the development of methods for DNA fragment amplification and detection with the use of polymerase chain reaction.