By Editorial Team on January 11, 2020 in Biochemistry, General Informations, Parasitology

This condition of presence of crystals in the urine is known as crystalluria. Sometimes crystals are found in healthy people and other times they are indicators of organ dysfunction, the presence of urinary tract stones of a like composition (known as urolithiasis), or an infection in the urinary tract.

Crystals that are Normal in Urine 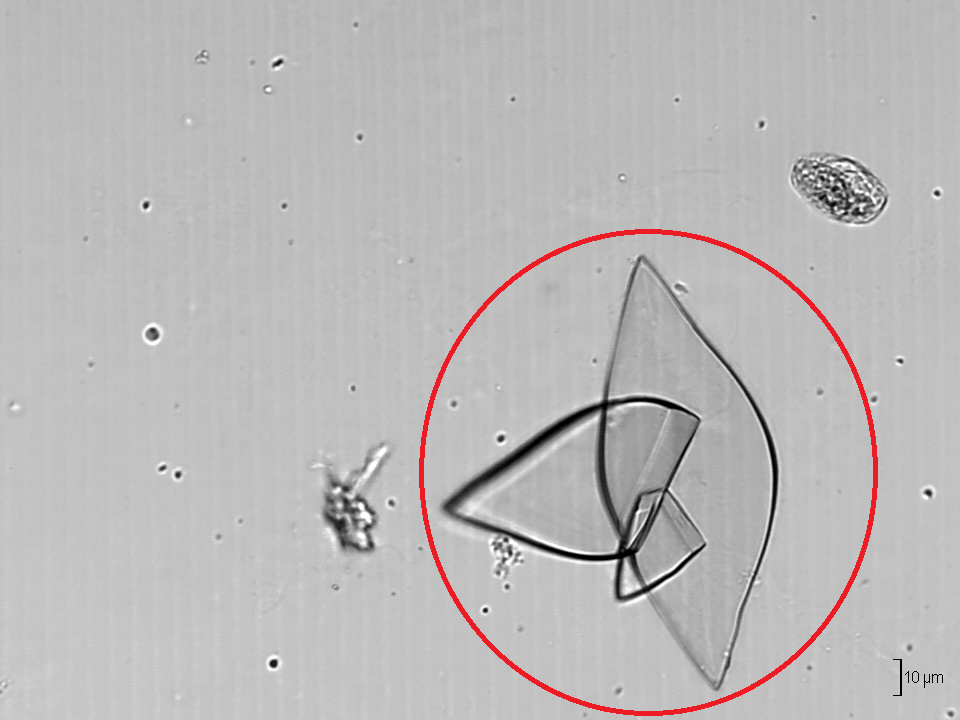 Uric acid crystals are of varying sizes and shapes, found in acidic urine. They resemble rhomboids, parallelograms, and rosettes in shape and are amber in color. Though they are seen in normal urine, are also an indicator of disease processes, such as acute uric acid nephropathy or urate nephrolithiasis. 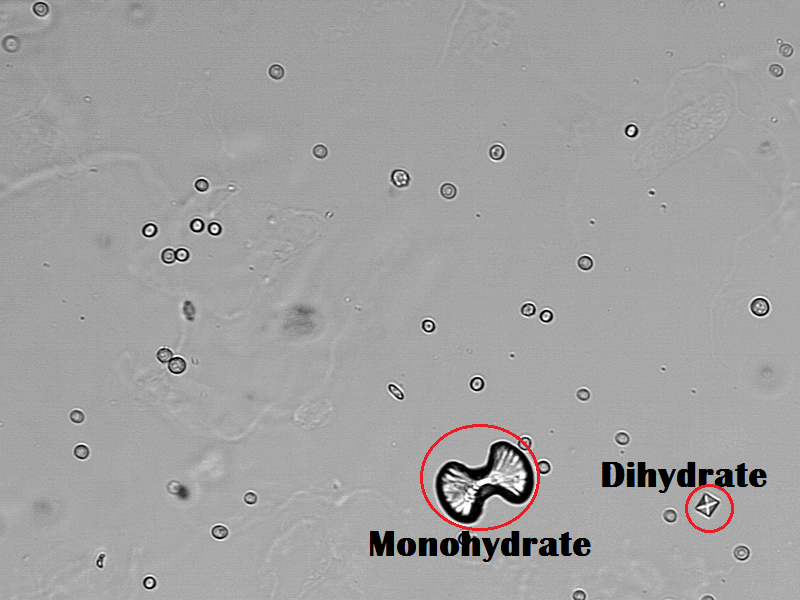 The monohydrate calcium oxalate crystal is described as the “picket fence” form. These dumbbells shaped crystals are common in ethylene glycol toxicity. The dihydrate form is octahedral or “envelope” shaped. 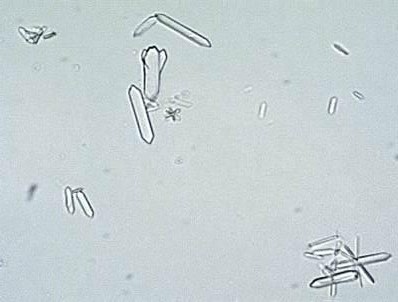 Hippuric acid crystals are found in acid, neutral, or slightly alkaline urine. These colorless crystals are prisms, plates, or needle-like in shape. These crystals are often conglomerated into masses. 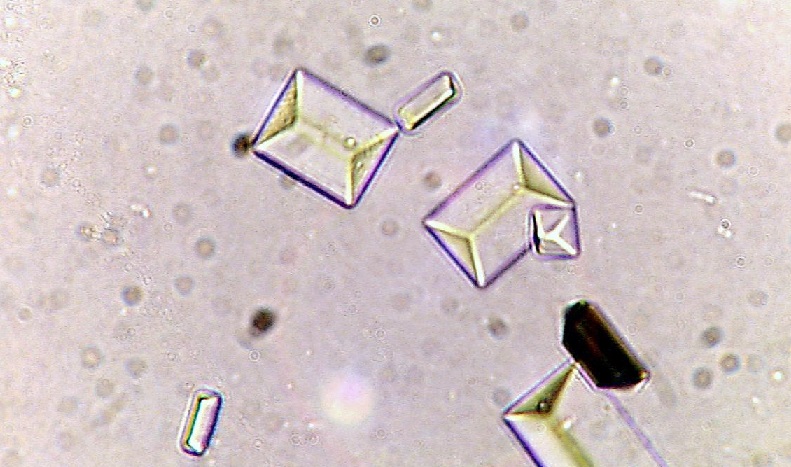 Triple phosphate crystals form in alkaline urine and are composed of magnesium, ammonium and phosphate. These are rectangular in shape or similar with the coffin lid. These are sometimes associated with a bacterial urinary tract infection caused by urea splitting bacteria. 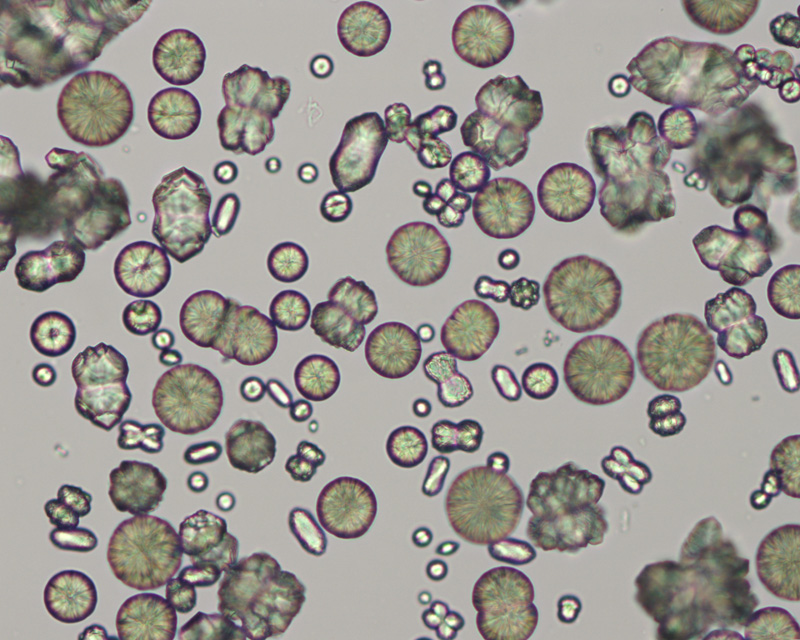 Calcium carbonate crystals are yellow to colorless dumbells or spheres with radial striations, found in alkaline urine. They are usually large crystals and can be readily observed at low magnification. 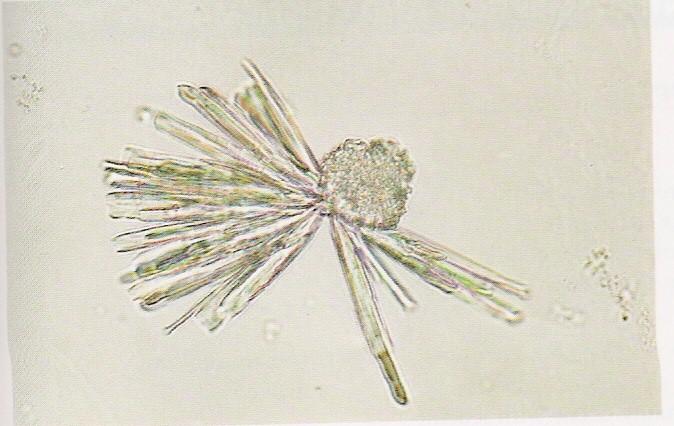 These are colorless crystals having shape like blunt ended needles or prisms, rosettes. These crystals are found in neutral to alkaline pH. 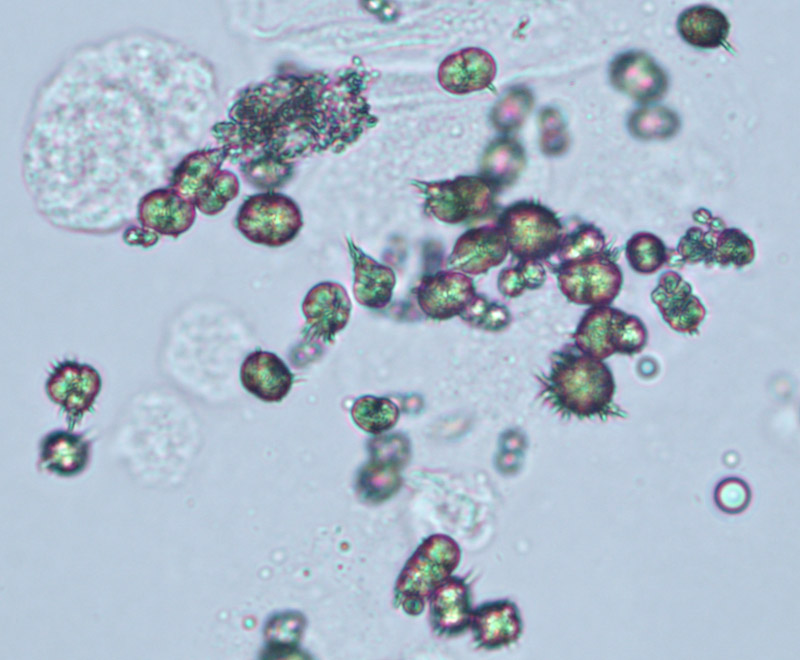 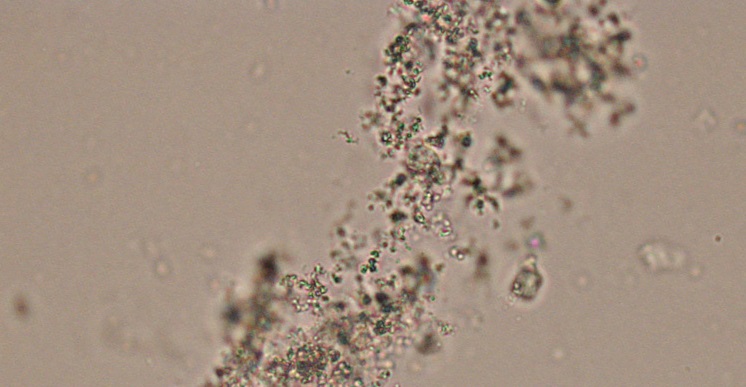 Amorphous urates are found in acid urine. These crystals may appear pink on gross analysis and yellow microscopically. These crystals appear as granules in the urine sediment.

Amorphous phosphates are found in alkaline urine. These granules are colorless microscopically.

Crystals that are abnormal in Urine 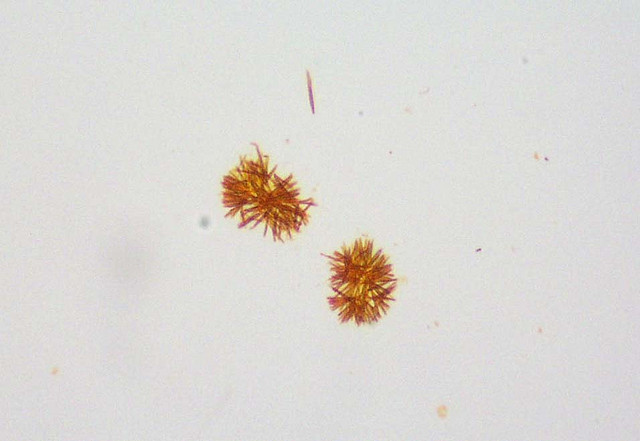 Bilirubin crystals are abnormal crystals in urine. They form from conjugated bilirubin and are needle-like to granular crystals that are yellow in color.

They are frequently attached to the surface of cells. Bilirubin crystals are seen in several hepatic disorders. 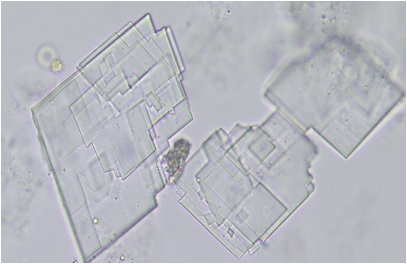 These appear as colorless rectangular plates with a notch in one or more corners and are found in acidic urine. The appearance of cholesterol is associated with the Nephrotic Syndrome. 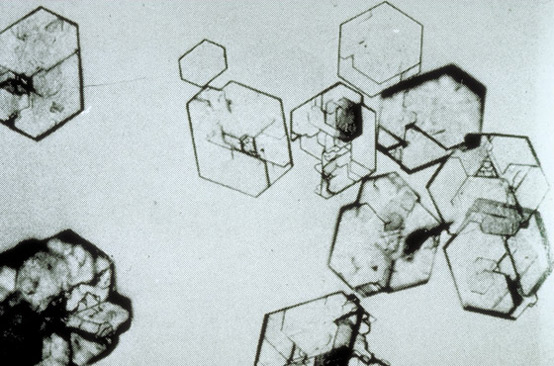 Cystine crystals are flat colorless plates and have a characteristic hexagonal shape with equal or unequal sides.

They occur in acidic urine that are associated with an inherited disorder. Presence of cystine crystals represents a proximal tubular defect in amino acid reabsorption. 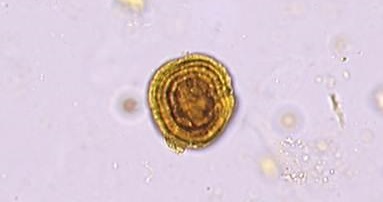 These are Yellowish-brown spheres with concentric circles with radial striations found in acidic/neutral urine. Leucine crystals may be seen in liver disorders in which amino acid metabolism is impaired. 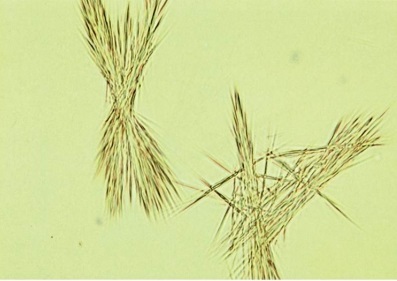 Tyrosine crystals appear as colorless/yellow fine needles in acidic/neutral urine. Tyrosine crystals may be seen in tyrosinemia and in certain liver disorders in which amino acid metabolism is impaired. 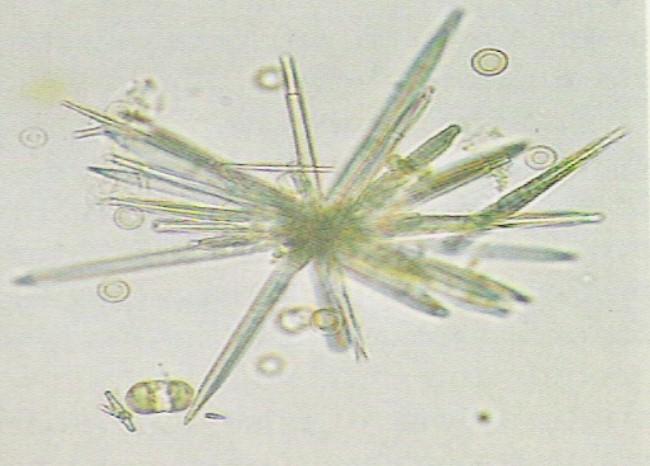 These are flat needles, sheaves of small needles or as spheroids. Often brown in color. The presence of sulfanomide crystals usually indicates administration of the drug and not necessarily a pathological condition.

However, their presence is also associated with kidney stone formation.

What does it mean to have crystals in your urine?

When there are too many minerals in the body chances are urine crystals will form and they are prominent in the kidneys. Crystals in urine can form into stone and they go unnoticed until such time they get large and began causing symptoms.

How do you treat crystals in urine?

There are many measures to get rid of crystals in urine but the most effective ones are extracorporeal shock wave lithotripsy, ureteroscopy, and percutaneous nephrolithotomy.

How can you tell if urine has crystals?

Urine has crystals if you notice the following symptoms:

Is it normal to have debris in your urine?

Debris in urine can be caused by many things and it is not normal to have such debris, especially if it includes cells, small stones, casts, crystals, and sloughing of tissues. Debris in urine is usually associated with urinary tract infection.

How do you prevent crystals in urine?

You can prevent the formation of crystals in urine by doing the following:

The presence of crystals in urine indicates kidney stones, but it does not always mean that you need medical treatments especially if they are just small in numbers. Usually, minute crystals can pass through the urine with little to no pain at all.

What causes amorphous crystals in urine?

The amorphous crystals in the urine are caused by transient supersaturation of urine and other factors like foods, changes in the pH and temperature of urine, which normally happens after micturition.

What is the best drink to flush your kidneys?

You probably have heard of drinks to flush the kidneys. There are plenty to choose from but the most effective is cranberry juice and dandelion. The former supports the urinary tract and helps get rid of urinary tract infection and calcium oxalate deposits. The latter stimulates the production of bile and aids in digestion.

What type of crystals are found in diabetic urine?

In the urine of a person with diabetes, you will find crystals like tyrosine crystals, uric acid, and calcium oxalate.

How do you reduce amorphous Urates in urine?

To significantly reduce amorphous urates in the urine, you have to alkalinize and dilute the urine. So, you have to increase your intake of water.

If your body is in a state of ketosis, it will attempt to reduce the number of ketones by means of excreting it through urination. An indicator that ketones are present in the urine if your urine becomes dark purple in color. This usually happens in people who follow a ketogenic diet.

In people with damaged kidneys, proteins can escape through the urine. Indicators of the presence of protein in the urine are bubbly, frothy, and foamy urine. There are also other noticeable symptoms such as swelling of the face, abdomen, and extremities.

What are the worst foods for kidney stones?

If you have kidney stones, you need to be very careful with your diet. You should limit your intake of stone-forming foods such as spinach, tea, nuts, chocolate, and beets.

Can humans get crystals in their urine?

The bold answer is yes! As a matter of fact, it can be found even in healthy people. It could be linked to an excess intake of vitamin C and protein-rich foods. However, you have to keep in mind that the presence of crystals in the urine could also suggest an underlying medical condition.

What color is urine when your kidneys are failing?

The color of urine is an indicator as to how well your kidneys function. if the urine becomes dark in color along with other noticeable changes like urinating less often and in small amounts, it means that there is something wrong with your kidneys.

What causes smelly urine in a woman?

The smell of urine is dependent on various factors such as the types of foods you eat, side effects of medications, and the presence of bacteria in the urine.

The urine of a person with diabetes smells fruity and sweet. It is the body’s way of getting rid of excess sugar in the blood. If you don’t know if you have diabetes but noticed that your urine smells sweet and fruity, you have to consult your doctor, especially if diabetes runs in the family.

What are the signs that something is wrong with your kidneys?

You will know that there is something wrong with your kidneys if you notice the following:

If you are in the initial state of ketosis, you will feel tired and weak. It is because the body switches from burning carbohydrates to burning fat. Other symptoms associated with ketosis are changes in the smell of breath (bad breath) and weight loss.

How long does it take to pass a kidney stone?

The duration of passing the kidney stone depends on the size of the stone and its location. If the stone is smaller than 4 millimeters, most of the time it could pass on its own within 31 days. If the stone is more than 4 mm but less than 6 mm, there is a 60% chance that you can pass it naturally within 45 days. Sometimes, it requires treatment to allow it to pass efficiently. However, if the stone is larger than 6 mm, passing it naturally seems impossible. The best way is to undergo medical intervention. The location of the stone is a huge factor too. Stones that are located at the end of the ureter are more likely to pass on their own than those attached to the kidney.

In patients with urinary tract infection, a triple phosphate crystal can be seen and it is associated with urea-splitting bacteria like P. mirabilis.