By Editorial Team on January 8, 2020 in Bacteriology, Immunology, Microbiology

As the organism cannot be cultured in artificial media, the diagnosis of syphilis depends upon the correlation of clinical data either with the demonstration of microorganism in the lesion or serological testing. Serological procedures for syphilis include the following.:

The Rapid Plasma Reagin (RPR) test is a macroscopic, non-treponemal, flocculation card test. It detects the IgM and IgG antibodies to lipoidal material released from the damaged host cells, as well as to lipoprotein-like material and possibly cardiolipin released from the treponemes.

The antigen used in RPR is a modified VDRL (Cardiolipin) antigen, in which micro particulate charcoal particles are used to enhance the visual difference between positive and negative results.

A cardiolopin lecithin-cholesterol antigen coated with carbon particle is mixed with patient’s serum. If the specimen contains reagin, flocculation occurs with a coagglutination of carbon particles contained in the antigen suspension, which appears as black clumps. Non-reactive specimens appear as an even light gray homogeneous suspension. 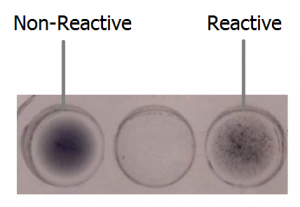 The titre is reported as the reciprocal of the highest dilution, which shows a positive test result.