By Editorial Team on January 7, 2020 in Bacteriology

Indole test is the a biochemical test performed on bacterial species to detect the ability of an organism to degrade the amino acid tryptophan and produce indole. It is used as the part of the IMViC tests, a set of four useful reactions that are commonly designed for the differentiation of enterics (members of family Enterobacteriaceae). The IMViC series includes following four tests

Some bacteria split amino acid tryptophan into indole and pyruvic acid using the enzyme called tryptophanase. Indole can be detected with Kovac’s reagent or Ehrlich’s reagent. Indole reacts with the aldehyde in the reagent to give a red color which concentrates as a ring at the top. 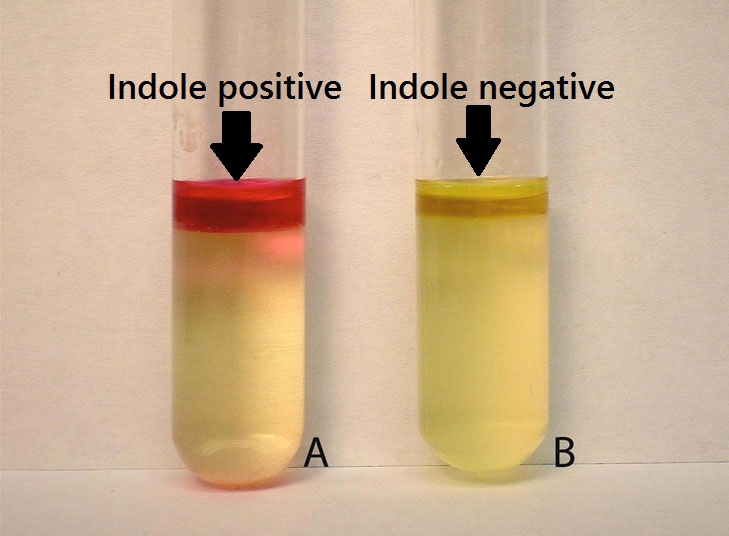 Formation of red or pink colored ring at the top is taken as Positive.
No color change after addition of reagent is taken as Negative.

Most strains of E.coli, P. vulgaris, M. morganii and Providenica are indole positive.

Tryptone broth :
Tryptone = 10gm
Sodium chloride = 5gm
Dissolve the ingredients in 1 liter of sterile water. Dispense 4 ml per tube. Cap tube and autoclave at 121oC under 15 psi pressure for 15 minutes. Store the tubes in the refrigerator at 4 to 10°C.

Difference between Endotoxin and Exotoxin
What is the Ames Test – Procedure, Uses, Principle and Interpretation

One Response to Indole Test : principle, procedure and interpretation