By Editorial Team on January 4, 2020 in Biochemistry
Glycolysis is derived from the Greek words (glykys = sweet and lysis = splitting). It is a universal catabolic pathway in the living cells.
Glycolysis can be defined as the sequence of reactions for the breakdown of Glucose (6-carbon molecule) to two molecules of pyruvic acid (3-carbon molecule) under aerobic conditions; or lactate under anaerobic conditions along with the production of small amount of energy.

This pathway was described by Embden, Meyerhof and Parnas. Hence, it is also called as Embden-Meyerhof pathway (EM pathway). 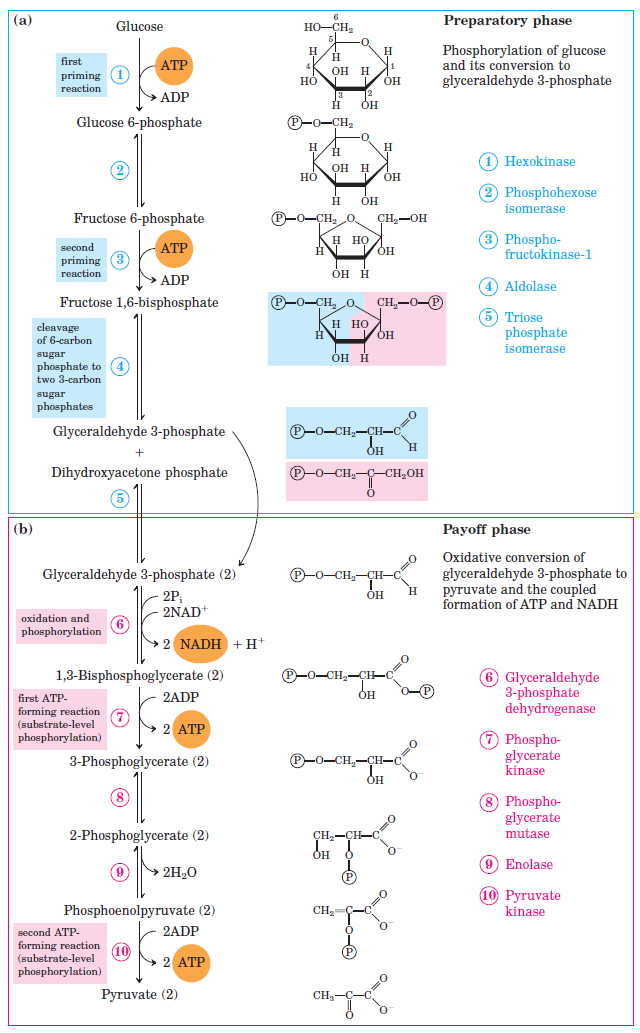 Glycolysis takes place in the cytoplasm of virtually all the cells of the body.

There are two types of glycolysis.

Glycolysis is a lengthy process and made possible by a total of 11 enzymes. There are two phases of the glycolytic pathway

Glucose is converted to pyruvate in 10 steps by glycolysis.

The glycolytic patway can be divided into two phases:

Step 1 : Uptake and Phosphorylation of Glucose

Step 2 : Isomerization of Glucose-6-Phsphate to Fructose-6-Phosphate

Step 5 : Interconversion of the Triose Phosphates

Step 9 : Dehydration of 2-Phosphoglycerate to Phosphoenolpyruvate

When animal tissues cannot be supplied with sufficient oxygen to support aerobic oxidation of the pyruvate and NADH produced in glycolysis, NAD+ is regenerated from NADH by the reduction of pyruvate to lactate.

Some tissues and cell types (such as erythrocytes, which have no mitochondria and thus cannot oxidize pyruvate to CO2) produce lactate from glucose even under aerobic conditions.

The reduction of pyruvate is catalyzed by lactate dehydrogenase.

Net energy (ATP) yield per molecule of Glucose in Glycolysis

Significance of the Glycolysis Pathway

How many ATP are produced in glycolysis ?

At the end of the glycolysis process, a total of two (2) ATP is produced.

Where does glycolysis occur?

It occurs in the cell’s cytoplasm.

What is the end product of glycolysis?

The end products of glycolysis are two ATP, two NADH, and two pyruvates.

Is glycolysis aerobic or anaerobic?

What is the function of glycolysis?

Does glycolysis occur in all cells?

Glycolysis occurs in both eukaryotic and prokaryotic cells.

Germ Tube Test for the identification of Candida albicans
Differences between Hepatitis A, B, C, D and E

23 Responses to Glycolysis : All Steps with Diagram, Enzymes, Products, Energy Yield and Significance