By Editorial Team on January 9, 2020 in Biochemistry

The Glucose Tolerance Test (GTT) is the most sensitive test for detecting borderline diabetes mellitus. Glucose tolerance means ability of the body to utilize glucose in the circulation.

It is indicated by the nature of blood glucose curve following the administration of glucose. Thus “glucose tolerance test” is a valuable diagnostic aid in the diagnosis of diabetes mellitus, insulin resistance, impaired beta-cell functionnand sometimes reactive hypoglycemia and acromegaly.

GTT is of two types depending upon the route of glucose administration :

OGTT is mostly preferred and is explained in detail here. IVGTT may be chosen for patients who are unable to absorb an oral dose of glucose (eg. malabsorption syndrome).

Following a standard oral dose of glucose, plasma and urine glucose levels are monitored at regular intervals, in order to measure tolerance under defined conditions.

The OGTT is indicated in following conditions :

There is no indication of doing OGTT in following conditions:

Normal Values and Interpretation of OGTT 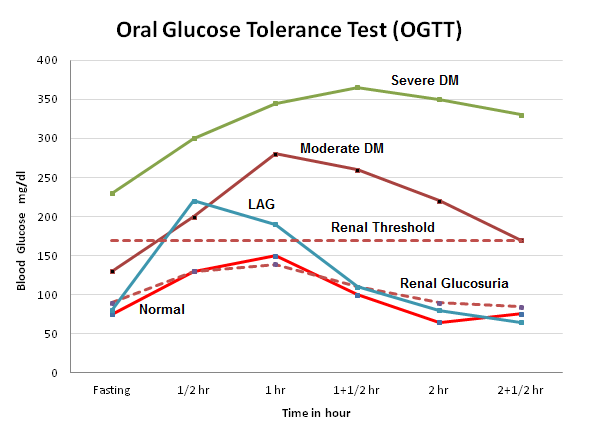 According to severity, GTC may be:

This curve is obtained in :