By Editorial Team on January 10, 2020 in Hematology, Microbiology, Parasitology

The fecal occult blood test (FOBT) is a simple, inexpensive and most frequently performed chemical screening test on feces. It is done for the detection of blood in the stool that is not visible on gross inspection.

When only small amounts of blood being passed in the feces, the blood (or its breakdown products) is not recognized and is referred to as occult (hidden) blood. The amount is usually less than 50 mg of hemoglobin per gram of stool.

An average, healthy adults usually passes upto 2 ml of blood per 150 gm of stool (2 to 3 mg hemoglobin per gram of stool) into the GI tract daily. Passage of more than 2 ml of blood in the stool in 24 hr is pathologically significant.

There are following methods in clinical use for testing for occult blood in feces.

These are the traditional methods using guaiac based reagents prepared in the laboratory, e.g. aminophenazone test, or ready-made reagent in kit tests. The conventional tube tests have been replaced by kit method which are very easy to perform and are inexpensive.

The principle of chemical tests to detect occult blood is based on the fact that hemoglobin and its derivatives react in a similar way to peroxidase enzymes– by catalyzing the transfer of an oxygen atom from the peroxide to a chromogen such as benzidine, o-toludine, guaiac or aminophenazone.

Oxidation of the chromogen is indicated by the production of a blue, blue-green or pink color. A simplified reaction equation is shown below :

Any source of blood will give a positive test. If possible the patient instructions should followed at least 7 days prior to the test and should continue through the test period. Patient instructions include both drug and diet guidelines. See INTERFERENCES below for more details.

The test is performed on a paper slide that contains paper sqaures coated with guaiac, a chemical derived from tree resin. A small portion of stool(fecal) specimen is applied to the paper.

A developer solution containing hydrogen peroxide (H2O2) is added to the paper. If the blood is present in the specimen, the iron (Fe) in the hemoglobin catalyses the reaction between guaiac in the paper and the H2O2. The completed reaction forms a blue color.

Modern fecal occult blood testing is moving to an immunochemical test which is specific for human hemoglobin.

This test utilizes a qualitative, sandwich dye conjugate immunoassay to selectively identify the globulin component of human hemoglobin in fecal specimens. The immunoassay uses a combination of monoclonal and polyclonal antibodies, utilizes an immunochemical chromatographic method for detection and has a high degree of analytical sensitivity.

Because this test is specific for human blood, no special drug or dietary restrictions are required. However, patients should not collect samples three days before, during or three days after their menstrual period, if they have bleeding hemorrhoids, blood in their urine, open cuts on their hands. 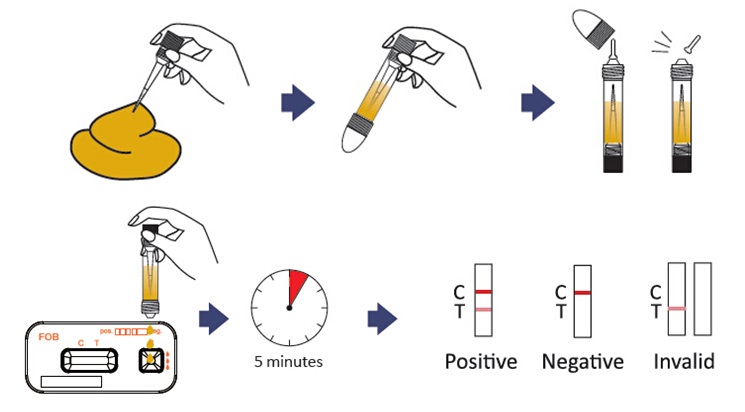 Some other methods like over-the-counter (OTC) flushable reagent pad/tissue method are also used which also produces a color change in the presence of blood.

A new, promising, and almost quantitative approach is to measure fecal hemes by the specific fluorescence of their porphyrin derivatives, after extraction of the porphyrins from the specimen to remove interfering substances.

Positive test result indicates that abnormal bleeding is occurring somewhere in the digestive tract. The commonest causes of positive occult blood tests in tropical and other developing countries are hookworm infection, peptic ulcer, colitis and bleeding from oesophageal varices due to cirrhosis of the liver.

Other causes include carcinoma in the gastrointestinal tract, erosive gastritis due to alcohol or drugs or inflammatory bowel disease.

Substances that cause false positive reaction :

Substances that cause false negative results :

Differences Between Amoebic Dysentery and Bacillary Dysentery
What is Urease Test ? Principle, Composition, Interpretation of Results