Difference between Cation and Anion

Ions are one of the common words you will hear in the chemistry subject. They are formed from atoms and electrons by way of adding or removing one or more valence electrons, which could either be a positive or negative charge.

In Newton’s law of attraction, opposite attracts. Therefore, cations and anions attract each other and form an ionic bond between them. (1, 2) 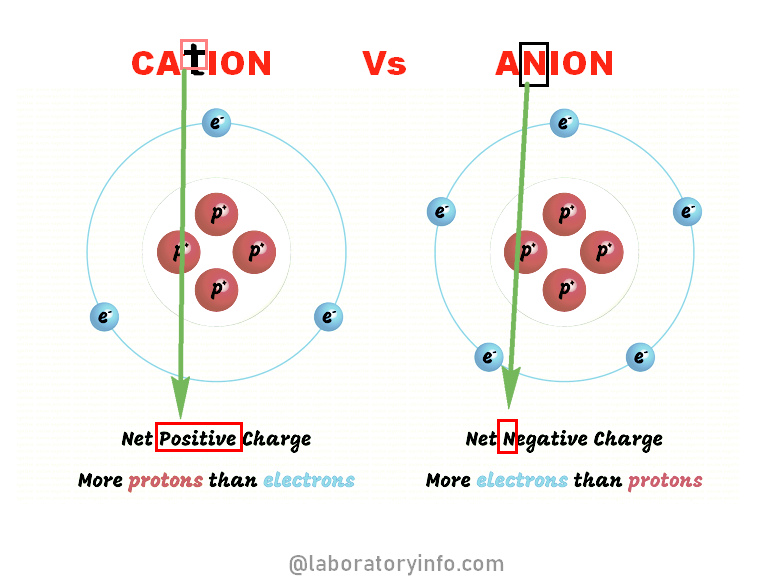 An atom in its neutral state has an equal number of protons and electrons. However, if it donates electrons (negatively charged), it is left with protons (positively charged), thus enabling the formation of cations to attain noble gas configuration.

During electrolysis, cations are attracted to the cathode (a negatively charged). The majority of metals are cations. A cation is derived from the Greek word “kata” meaning “down.”

Some of the common cations are hydrogen, calcium, and potassium. How much electron is lost as well as the charge of the ion is shown after the chemical symbol. (2, 3)

Anions are negatively charged ions. They can be monovalent (can combine with single hydrogen ion) or bivalent (can form two chemical bonds).

Such a type of ion is attracted to anode (positively charged) during electrolysis. If non-metals are reduced or ionized, they usually form polar compounds. In other words, when a non-metal gains electrons, anions are formed. Examples of anions are chlorine, iodide, and hydroxide.

One distinct characteristic of the anion is that, it has more electrons than protons. The term anion is derived from the Greek word, “ano” which means “up”.

Anions are formed when one or more electron is gained from another low-affinity atom. (1, 3)

Examples of cations and anions:

The concept of cations and anions and its applications

Ions have the ability to conduct electricity through liquids or solutions. You might be wondering why there is a need to deeply and thoroughly study ions, specifically cations, and anions. Well, the main reason is these ions are responsible for the flow of electric current in the dry cell.

The current will flow towards the positive charge and moves to the opposing direction of the negative charge carrier. Basically, the electricity in the dry cell flows out of the cathode and flows into the anode. (8, 9, and 10)

As you can see from the table above, cations and anions have so many differences. However, you have to keep in mind that the differences mainly depend on the ion’s electrical charge. Ions can be atoms or molecules that have lost or gained valence electrons either single or multiple.

Every ion is charged but they differ in the type of electrical charges attach to them. It is important to understand the differences between anions and cations, especially when using the periodic table.

Basically, it shows proof that opposite attracts and there is always a possibility that non-metals can get attracted to metals.